As I’ve journeyed with hundreds of First Peoples over the last 28 years, I’ve realized that my understanding of Canada’s history and the experience of Indigenous people on this land was not accurate. John Johnstone, Inner Hope’s Cultural Mentor, shares an important perspective below. I encourage you to open your heart and mind to his wisdom and experience.
-Jenny Shantz, Executive Director 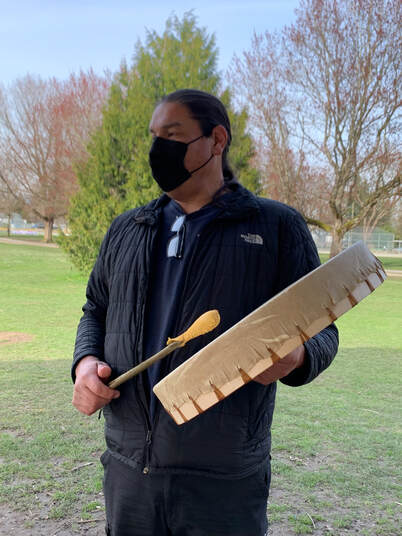 John and his cousin led a drum stick making workshop for our community members in March.

"When I think about springtime, and renewal, the first thing that comes to my mind is our “ruts”. We get so entrenched in our ways, we do the same things over and over again. As the Church in Canada, we’ve tried to do the same things the same ways for 450 years, since colonization. I ask the churches: how many First Nations people do we have in our congregations? You can tell a lot about a tree by the fruit it produces, and right now that fruit is close to nothing. Something needs to change. We need to make room for new growth.
​
The Indigenous people up north, in the Gitxsan area, have been arguing with the government about cultural burns. They have a long history of doing these controlled burns. But this burning freaks people out—the government and the logging companies see it as a loss of profit. As the Indigenous people see it, the forest is overgrown; the upper canopy doesn’t let through sunlight. There’s no lower vegetation, no animals, no life anymore. But when they burn the old growth, new growth comes, animals come back. The relationships between two-legged and four-legged and the land returns to rightness. This is sustainability over profit.
​
Who has authority over the land? The one who owns the land is the one who made it, the Creator. The first people He placed here are the ones who have authority to steward the land—the water, the plants, the fish, the birds, the creepy crawlies. The authority given by the Creator can’t be taken away by man. When the newcomers came in 1492, they were welcomed and invited in to the land. This welcoming gave them authority to be on the land too. But shortly after, that authority was ruined—the newcomers valued profitability over sustainability. They brought disease that killed off a huge percentage of Indigenous people. More and more came, and they made laws, bylaws, and regulations. The host people were hardly ever invited to the table. Instead of God-given authority, they had man-made power to be here because of rules they created.

When Jesus came and died on a cross, it was to bring relationships back into rightness. The very existence of salvation comes from relationship: the Father, the Son, and the Holy Spirit. When I hear that we are made in God’s likeness, not just His image, I hear that we are meant to be LIKE him. How do we expect to see righteousness pour out from the Creator if our relationships are not in good standing? As a church, we need to focus on relationship building, and it has to be a two-way street.
​
I am Stó:lo*, people of the river. As a First Nations person, I have authority to welcome people to this land; it’s a spiritual deal. But that’s a one-way street. How can we change what has been done for the past four centuries? How do the newcomers give up their power to right these relationships?
​
I work at the Mennonite Brethren denomination’s missions agency, Multiply, as Ambassador to First Peoples in Western Canada. My former boss, a White guy, gave up power over First Nations ministry, and made me his partner. He relinquished power so that we could bring forth good fruit. I also know a farmer in the Fraser Valley who felt he needed to right relationships in his part of the world. He shared profits from the garlic and kale he grew on the land with the Kwantlan First Nation in Langley. In the White world, cash is king. Giving up money is another way of relinquishing power.

Relationship birthed salvation. If we want to see the Creator’s love and righteousness poured out in our land, we need to renew our relationships. What is the old that we need to burn away to make room for new growth? What sacrifices do we need to make to bring rightness to our relationships?"
-John Johnstone, Inner Hope Cultural Mentor
* The Stó:lo are a group of First Nations peoples inhabiting the Fraser Valley and lower Fraser Canyon of British Columbia.